I traveled to The Bahamas fresh off of my time working on a congressional campaign for the 2018 mid-term election in The U.S. Perhaps it was for this reason that I was at a loss for what to do in The Bahamas. Perhaps it was because I needed time to mentally decompress that I did exactly that, laying on the beach and doing little else, and perhaps it was a very good thing for me.

While in The Bahamas, I visited three islands, Grand Bahamas Island, where I stayed in Freeport; Nassau, where I stayed (and just about never left – it was that great) Bahasea Backpackers; and Eleuthera (that’s what I’ve got covered here in this Eleuthera visitors guide!). My favorite, by leaps and bounds, was Eleuthera. I found I was busy with things to do on Eleuthera Island and had a great time!

Eleuthera is 110 miles long but just 1 mile wide at its very widest point. It’s full of stunning sand beaches and it’s quiet. No busy nightlife or cruise ships docking every day. This is Bahamian living at its finest. Here’s your Eleuthera visitors guide to help you navigate the long island.

How to get around Eleuthera Island:

This might be the most important point as it’ll dictate everything else you do on the island. Rent a car. There are taxis, but remember what I just said up there in my intro? The island is 110 miles long, that’s going to be a lot of taxis and A LOT of dollars. Since there’s no one obvious center to the island, no population center per say, and plenty of beaches spread across its length, a rental car is by far the best way to get around. There aren’t any big name rental car companies on the island. They’re all small, locally owned companies, and they’re all expensive. Like, ouch, expensive. I ended up using Berry Cadet and got a three day rental of a Ford Fusion for $261. I ended up with this company because it was the cheapest, and yes, I shopped around.

It does appear that if you fly into Governors Harbour airport you’ll get even cheaper rates as just about all the companies charge for pick up at North Eleuthera Airport (ELH) where I flew into. The charge is $60 so if the difference in flight costs is less than that, head for Governors Harbour and make your way from there.

I made my rental car booking via email and a representative from the company was waiting at the airport with my name on a sign and the keys to the car. I paid for the rental in cash – I could have used a card but there would have been a surcharge and I would have had to arrange that beforehand. The company had nothing from me besides my drivers license number and the cost of the rental. I paid no deposit and was instructed to leave the car in the small airport parking lot and the keys under the mat upon my return. There’s a lot of trust going on in this system.

I ended up leaving some cash along with the keys when I returned the car because the gas station, just before the airport, wasn’t open when I arrived back early in the morning for my flight. If you’re dropping off at ELH before 8 AM make a plan to fill up beforehand!

There’s lots of info out there about getting a bigger car to get you around the Eleuthera roads which, besides the one main road running the entirety of the island, can be pretty rough and sometimes virtually non-existent. My Airbnb host complimented me on my driving abilities so maybe it was for this reason I didn’t struggle, and I did go down some sketchy lanes, but I say you’ll do just fine in anything similar to the Ford Fusion I had, and if you go for anything bigger, the price of the rental will start going higher.

I stayed in an Airbnb near Surfers Beach. It was a quiet little spot in from the water but with a great view out over the trees onto the Atlantic side of the island. The road to my Airbnb was unfinished, to be polite. It was made up of uncovered rock face and there was no semblance of pavement or dirt track, it was dark at night, and quiet. Honestly, I recommend this type of spot, Eleuthera is for getting away from the lights and the noise! If the Airbnb I stayed at isn’t your style, but you like the location, Surfers Manor is a spot slightly closer to the main road, but down the same side street, before you get to the really rough surfaces.

Governor’s Harbour is one of the main population centers on the island – it’s a bit farther to the east of the island and has things like a small grocery store and some ATM’s. If you’re looking for that sort of convenience you’d want to be closer to Governor’s than I was.

And, if you’re looking for a 5-star resort type of experience, I’m not sure what you’re doing on my blog, but I’ll point you to what I know of. The Cove is the only one on the island, I drove by it a number of time, it’s gated off and back from the road so I didn’t get much of a look. Online it doesn’t have great reviews but the pictures look pretty enough. A bit of a downgrade from 5-star, Pineapple Fields is one I’ve seen recommended time and again, it’s 4-star, so still out of my travel familiarity zone but it looks to be in a more desirable area than The Cove.

What to do on Eleuthera Island: 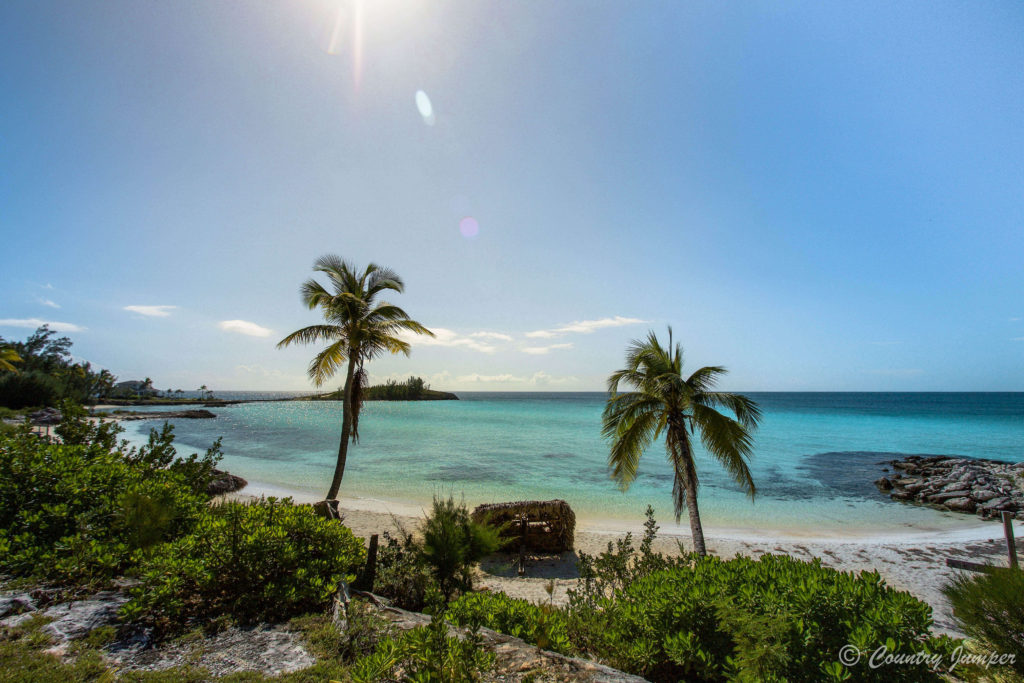 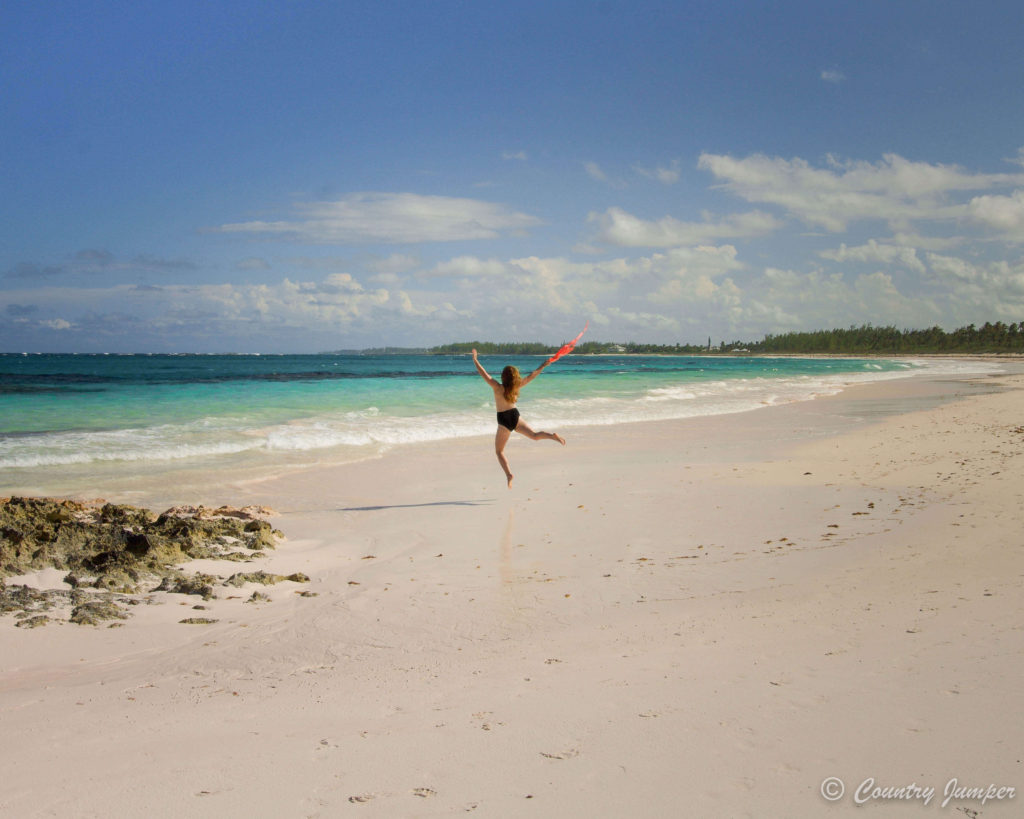 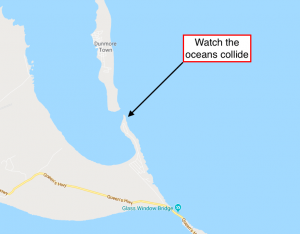 How to get to Harbour Island from Eleuthera Island 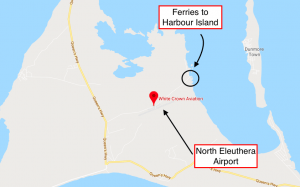 Ferry from Eleuthera to Harbour Island

This information was something I could not, for the life of me, find. As I mentioned above, I thought the ferries to Harbour Island might go from the closest point to Eleuthera, they do not. Instead, they go from a point beyond North Eleuthera Airport, which is marked on Google Maps as White Crown Aviation, and the ferry port is completely unmarked. The ferries go continuously throughout the day and leave when the boat is full, the trip is 10 minutes long and costs $5 each way. I heard that the boat drivers can be known to start drinking once the sun begins to set, so don’t plan on returning after dark, it’s best not to be stuck with an intoxicated pilot, even on a short crossing.

What to do on Harbour Island

When you get off the ferry on Harbour Island, there will be offers of golf carts for rent. Unless you have physical limitations, these are unnecessary, the island is very walkable. Here’s what to do for your day trip to Harbour Island 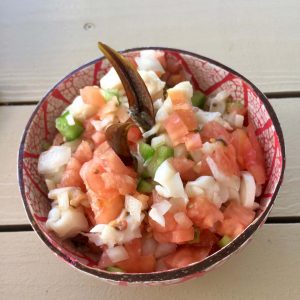 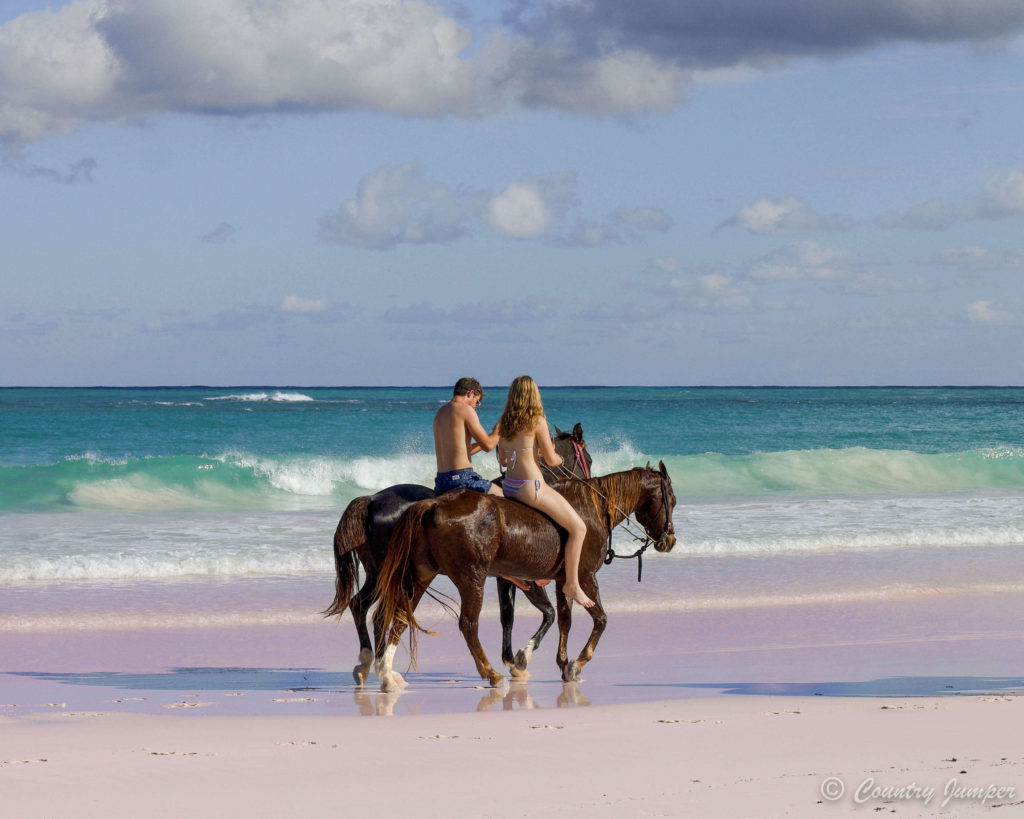 If you’re looking for a quiet getaway, I highly recommend Eleuthera. Many people flock to Nassau because it’s the better known of the Bahamian islands, which is exactly what makes it busier and less relaxing. Eleuthera, hands down. Let me know if you have any other questions, always happy to see what answers I can get you, just shoot me an email!

I’ve never heard of this island, looks like paradise! I love eating fresh conch in The Bahamas, and I would definitely pick a beach right now over the polar vortex in the US 🙂

Hahah totally feel that! Conch salads are so good, and I totally recommend a visit to Eleuthera!

Beautiful pictures, and this sounds utterly blissful! I think my travel to-do list just got a little longer!

Thanks Rachel! I hope you can make it to Eleuthera, it is bliss!

By Caitlin Time to read: 9 min