Galloping Past the Pyramids

The more I think about going horseback riding in Egypt, the more I realize how epic it was. I’ve ridden horses all my life, all over the world, but riding in Cairo was the first time I got to gallop past pyramids thousands of years old.

I was lucky during my visit to Cairo because I was visiting an expat friend who’d been living there for several months already. That meant I didn’t have to book much – or do any research really for that matter. Except for where to go riding, that wasn’t something he knew nothing about. But I was really excited by the idea so I pursued it. And, let me tell you, trying to book something in Egypt (on a budget) isn’t straightforward. I contacted a few different providers and Laila Oasis Arabians was the company that ended up being the easiest to communicate with and thus book with.

A friend who was also with me visiting that third friend, decided to join me for a ride, it was her first time but she was game. I was in contact with Claude via Facebook messenger and then WhatsApp – this type of communication is perfectly normal in a country like Egypt, so don’t think it’s weird or personal if someone you are trying to book a tour with asks for your WhatsApp number. We agreed on a date and time, he told me the price, and sent me the address. Jacqui, the game rider friend, and I, were coming from the center of the city where we’d been doing some sightseeing during the day. We got an Uber – the very easiest way to get around Cairo – and hoped we might get to the stables on time. There were very evidently lots of wrong turns and we drove down lots, and lots, of very bumpy, very crowded, very wrong little streets. Unfortunately, while Uber is prevalent, maps are far from accurate, so if your driver doesn’t know exactly where he’s going, expect some hiccups en route. Lucky for us, we were not the only ones running late. We got to Laila just barely in time and I asked the first young man I spotted for Claude – the guy I’d been in touch with. Turns out Claude was on holiday in France. I think Claude might be French, so presumably he was back home. Claude had not told me he would not in fact be at the stables to meet us. O.K. Fine. So we waited.

Besides taking tourists out for desert rides, and schooling locals, Laila Oasis Arabians breeds horses. And everything you read there in that title is on the farm. It is an oasis. There is green, green grass that spreads out beneath your feet and into the distance. A little arena at the back of the property is full with somewhat home-made show jumps, and there is a yellow viewing house paneled in glass windows and furnished in a fashion reminiscent of colonial times. Next to the area where we waited beneath some shade, there were two small pens with mares and their newborn foals. They stood on thick layers of straw and were happy to nuzzle your palms as their babies poked only their noses cautiously out from behind their bums. Dogs roamed freely. Children did too. I was annoyed that we had to wait past the time our appointment was – but that’s mostly because annoyed is my natural state of being, and not because anything about where we were was unpleasant. 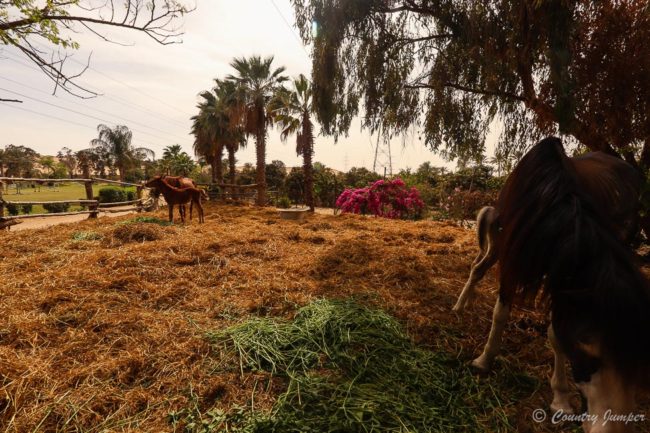 Mares and their foals

Eventually, a guide returned with another small group of people and Jacqui and I got on. They’d provided us with helmets previously so we were all set. As I said, this was Jacqui’s first ride, so she was hooked up to a lead line which our guide held from the back of his own horse. The man who headed out with just the two of us was Egyptian and spoke only some basic English phrases. He was kind and very carefully watched over Jacqui. We headed for the edge of the oasis and out into the desert. To our left we could see Cairo, the thick mess of dark buildings behind a screen of hazy heat. And in front of us were pyramids. These were not, of course, The Great Pyramids, but that made them all the more alluring. Claude, in our initial Facebook messages told me we would be riding to the Sakara, Abu Sir Pyramids, so I can only assume that is in fact where we went. The pyramids we rode around were only partially uncovered, some even more obscured by mountains of sand than others. They were so clearly not a tourist attraction – there was absolutely no one else around. Off in the very distance we could spot the tops of The Great Pyramids, where we’d visited the day before. The landscape is flat save for the undulation of sand and the dunes the wind builds.

As I’m an experienced rider, our guide was happy for me to do as I pleased, I trotted around, went for a quick canter (gallop) every now and again. My horse was chill – happy to do as I asked, or just plod quietly along through the sand. Jacqui too wanted to try her hand at a bit of a trot, and I could tell this made our watchful guide a bit nervous. But he did as she asked and let her trot, on the lead. And then, as we headed back to the stables, she asked for a canter. So we convinced him to let her off the lead. I got just in front of her and we galloped next to pyramids thousands of years old. And Jacqui, I am very happy to report, stayed right where she needed to be, on that horses back.

All said, we rode for about an hour. We did an out and back route, past several pyramids. Looking through the options now (the website I’ve linked you to is one I don’t remember existing when we made our bookings) it seems there are several choices for rides, starting at a single hour, as ours was, all the way up to two days of riding.  We paid 250 LE for the hour – and I believe that’s the rate for any of the hourly rides – each. That translates to about $16. A steal for a horseback ride!

My rating is a yes. I’d do it again. I might actually go for a longer ride. But I’d give myself more time with no pressure to be anywhere afterwards. We had plans with friends which made the whole everyone was late thing just a tad more annoying then it otherwise might have been. So, remember that this is Egypt, and things might be a bit delayed. Have a coke, stroke a nose, and chill out. 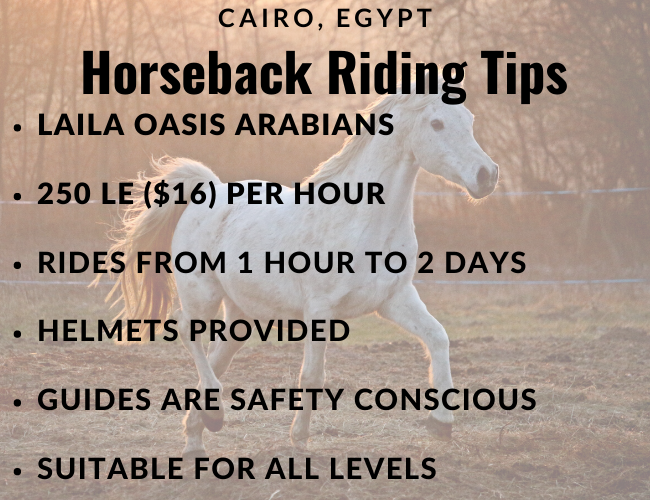 What You’ll Need For Your Ride: 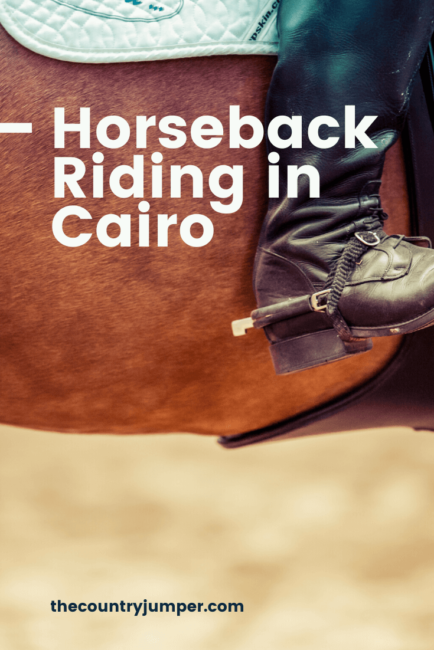 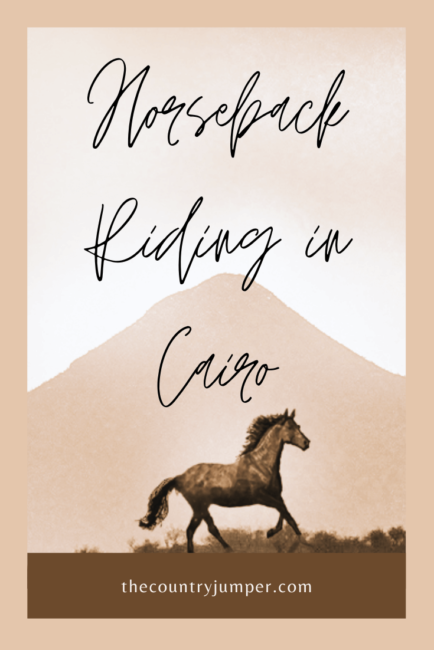 Always wanted to try horseback riding. Egypt looks a great place to visit, too. I noticed many Egyptians speak bad English, but still provide great service (we had same experience at quad safari).

I definitely had lots of great service and smiles all across the country! You should definitely try going for a ride somewhere 🙂

I always want to go horseback riding on vacation on a sandy beach, but the sandy desert could work too 😛 This sounds like such a fun experience, thanks for sharing!

Sand anywhere is fun to ride in! Beaches are of course lovely but often times horses can be a bit nervous around the waves.

By Caitlin Time to read: 6 min Africa A Day Trip to Fez