Is It Ethical to Travel to Myanmar?

A Conversation About Burma and Tourism

I was sitting on the rooftop of a hostel in Mandalay. Jetlag was still catching up with me most afternoons and it’d been a few years since I’d been under the south east Asian sun, so several hours of walking around was quite literally burning me out. I’d taken to finding refuge in the covered and breezy rooftop with a book, a bottle of water, and views. Staff slowly started filling the space that third afternoon. I was sat quietly in the corner and nobody asked me to move, so I stayed. The manager called the meeting to order. Somehow, the manager of this hostel which had multiple locations around the country and one in Italy, was from Singapore, and as such spoke English. It was clear that many of the staff though did not, and one of them was translating every so often for the others.

The manager began with praise for her staff, crowded around a single table. Praise of work well done, work well done that was bringing more customers in. Customers who had stopped coming over the past few years. I sat there, my eyes on my book, the pages not turning, my ears tuned entirely to their story. The story of the people who are miles away from the Rohingya, eternities away from the politicians and the system which has systematically worked to exterminate the ethnic group. The people who are as responsible for those atrocities as I am for those of my government, of which there are plenty. I had gone to Myanmar knowing I needed to take something more away than a few pictures of pretty temples. This was it; their story. This was the story of why visiting Myanmar right now might in fact be a very, very good idea.

On that rooftop the manager spoke of bonuses and expanding hours, she spoke of ways she would work to put money in the pockets of these people. These people who made beds, answered emails, swept floors, cooked eggs, cleaned toilets, washed towels, greeted us with smiles, and worked their asses off. These people who I was giving my money to.

I’d made the decision to visit Myanmar partially because I had the time, yes. But partially because I knew it was a beautiful place and friends had told me about it. Friends had told me I would love it. But I knew the story – the stories. I knew what had happened – what is still happening. But I also knew myself. I knew that I was not the same me of many years ago and I was not going just to drink cheap beer and party on beaches. I was going to learn about and experience a new country. And I knew, because I have done it so many times, that there is nothing wrong with that.

I was mindful with my bookings, checking that I would be staying at locally owned accommodation and putting my money, as much as is ever possible, into the hands of locals rather than the government. I was all set to go for a little over two weeks and then, at the very last moment, I changed my plans.

I changed my plans because someone else told me I ought to. And I was immediately furious at myself. Instead of having the time to properly experience the country and having the chance to talk to the people, I would be there for four nights. I would fly in, I would fly out, and I would do it no justice. And I would not be able to have the very conversation I travel to have. But I did my best to understand it still.

Probably the best way to talk about all of this is to look at what is happening. It first must be said that for the purposes of this piece I will not be able to cover it all. Because so much of what is happening in that part of the world has deep rooted causes. British colonialism. The American Vietnam War, which had further reaching effects than many choose to acknowledge.

Knowing that I can only skim the surface, let me try to do that.

Recent history has seen the Rohingya being systematically massacred, raped, and burned by Burmese security forces; a claim which has been backed by such organizations as Human Rights Watch but denied by the Burmese government. This group, the Rohingya, are a Muslim minority in a country which is predominantly Buddhist, they have been denied citizenship of their own country. Their government, whom they take part in electing, does not acknowledge their existence. Many issues still playing out today can be traced back to the 1982 citizenship act which first denied the Rohingya people the right to citizenship. But a large-scale attack broke out in August of 2017 seeing over 6,500 Rohingya killed and a further 600,000 plus fleeing the country to live in refugee camps, primarily in Bangladesh, since then. The land which the Rohingya inhabit and have been being pushed off of is near the border with Bangladesh, it is a corner of the country and it is far removed from the vast majority of everyday Burmese citizens.

The UN has called the situation the fastest growing refugee crisis in the world. 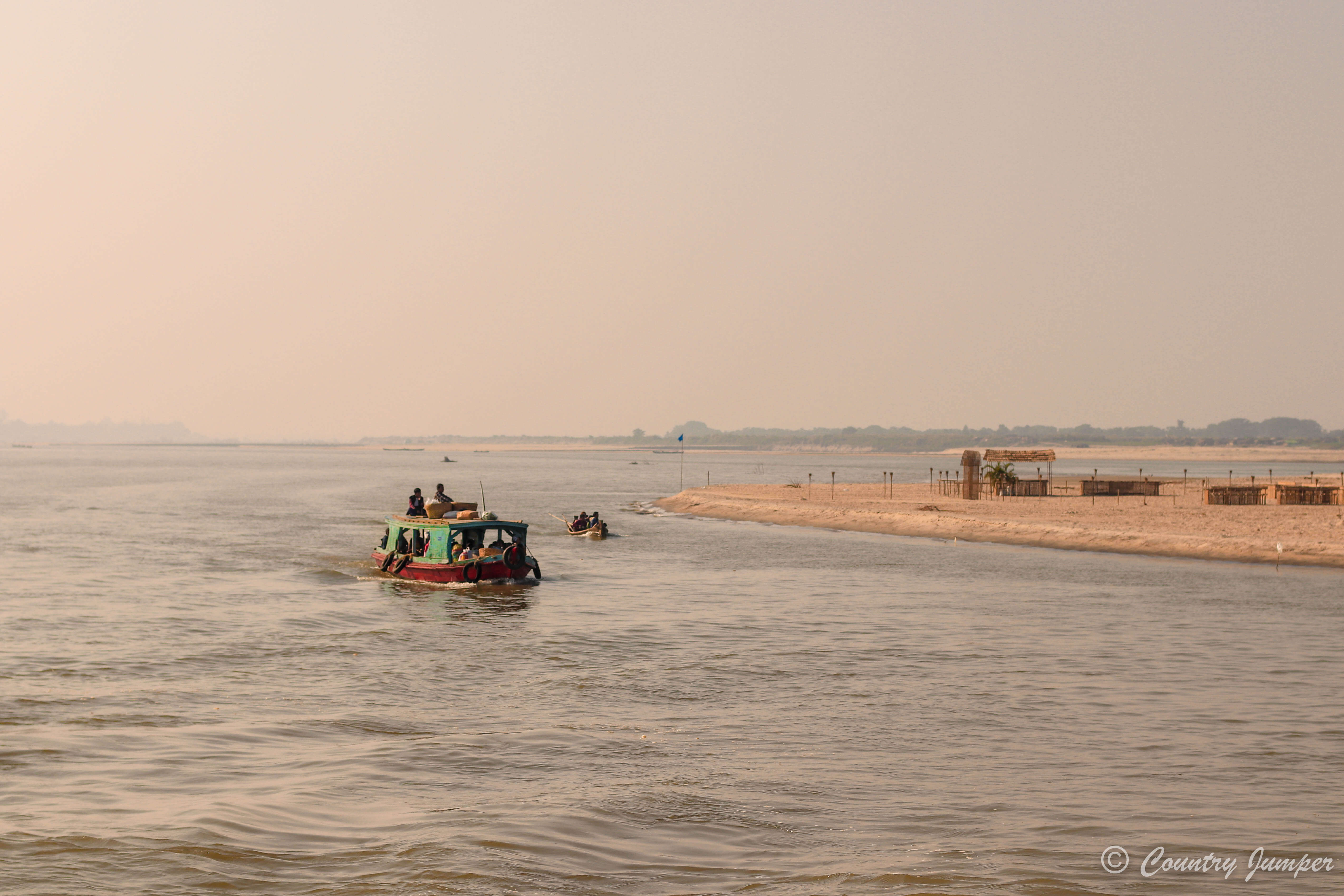 There was a guy on the rooftop one night. One of those guys whose hair is a little too long and socks a little too dirty. One of those guys who plays acoustic guitar and always gets the ‘local’ experience. He was talking (read: bragging) of all the ‘off the beaten trail’ places he been to and was going to in Myanamar. He was essentially going to hit every region. Except, he said ‘one’. Where you couldn’t go “because of the genocide.” If that’s you, if you’ve got a checklist and this is just another Xin a box. Don’t. If a genocide is an inconvenience to you and getting your travel list ‘done’ I can tell you with all confidence that you ought not to visit. In fact, despite the fact that I think there are no wrong ways to travel, you might have found one. This genocide is not just an inconvenience to you as a traveler. There are other beautiful places without quite as deep rooted and complex political issues in which thousands of people are losing their lives.

But if you’re not that guy on the rooftop, then maybe you should go. Because, ultimately, as travelers, world citizens, educated, and compassionate human beings, where do we draw the line?

Those people who told me I ought not to visit Myanmar are quite comfortable with visiting Israel. What about them? Even playing ground because both parties are armed? Hmmm. And what about the children being thrown in cages all across The U.S.? What about them?

I recently had a conversation about the use of the term genocide, and how we ought to rethink using it exclusively for situations in which actual killing is taking place. Because if one group of people are taking actions to end the existence of another, regardless of if they are actually physically killing them, they are committing a genocide.

So, I ask you again, where do we draw the line?

And finally, I’ll leave you with this.

After I left Myanmar I took part in a WINGS webinar focused on Myanmar. WINGS is the Worldwide Initiative for Grantmaker Support. I asked the panelists, some local Burmese, all in the non-profit sector, what their thoughts on tourism to the country were. They were all for it. They spoke of the local people who it benefitted, they spoke of those people on the rooftop and their bonuses. They said yes. Come. Be good tourists. But come and spend your money, spend it locally, and be responsible.

Yin Myo Su from the panel, a native of Inle, Myanmar said this:

“The Tourism industry is feeding a lot of people”

This is not an easy topic. I thank you for thinking about it primarily, and for taking the time to read what I have thought on it. I encourage you to discuss it, I encourage dialogue and challenges to my experience and my take, but if you’re interested in leaving a comment please do so in the interest of learning and discussing, not hating and shaming. Thank you! 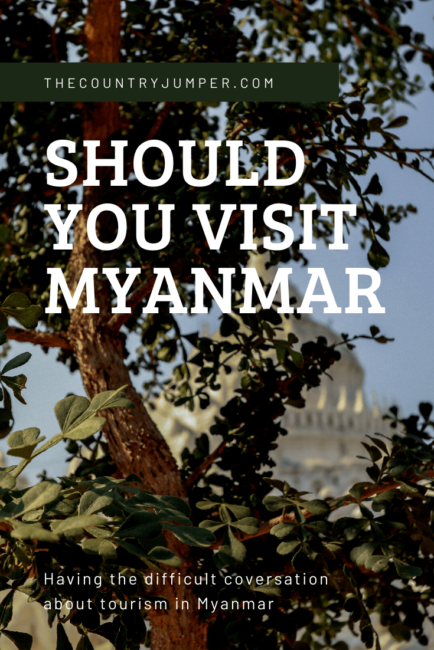 That is quite a touchy subject, but I think you handled it quite well. I think if you are careful where you stay and where your money goes, I would think it was ethical. If I went into a business and they were spreading hate propaganda I would just leave. The average citizen is not responsible for what their government does. Especially if that government forced their way in. Even still just because you vote for someone doesn’t mean you are responsible for their misdeeds.

If for instance you stay at a hotel and you find out it is owned by a war criminal, and you still choose to stay there, then that would be unethical. Or yes, visiting a mass grave as a “tourist attraction” would be disgusting. Unless of course you were going for the sake of mourning.

I think if we all understood each other better, than maybe the world would get along better. Travelling is a pretty good way of accomplishing this, as long as we keep open minds.

Thank you so much for reading and for your feedback. It took me a long time to put this into words and I still didn’t feel like I’d quite nailed it but I’m glad what I wanted to say came across to you.

All of this points you’ve listed are totally true – it’s what we do with the knowledge we have that is the most important. And yes, supporting innocent locals is never a bad thing.

Is It Ethical to Travel to Myanmar?

By Caitlin Time to read: 6 min Europe Norway on a Budget