The Challenges of Cuba

Living without Wi-Fi is initially, perhaps the biggest challenge. I hate that I’m such a first world problemer and I’m trying not to care. It’s not that I can’t get on Instagram, or Facebook, or email or whatever. It’s waking up in the morning and not being able to check the weather before I hurriedly get dressed and then realize its actually 10 degrees cooler than it was yesterday. Or it’s wanting to book my final night back in Havana and having to send my Airbnb login details back to my brother in the USA and have him book it for me. Or it’s wanting to look for what to do, or where to eat in a specific city. Or it’s that once I do get on the Wi-Fi, everything is blocked. I can’t check my online banking, which means I can’t pay my bill. I also can’t do a bank transfer to pay for the excursion I wanted to take in Trinidad. I can’t download offline maps or cancel my Spotify subscription which I can’t use. It’s waking up the first morning in Havana and not being able to figure out where the school I’m meant to go to is. It means, quite simply, being helpless.

The next challenge, is the money. I simply cannot get any more. What I have is what I have. All financial institutions in the U.S. have blocked use in Cuba. The only possibility would be a Western Union transfer, and while that is a last resort possibility, it is not an ideal one. (EDIT: I was told later on that a Western Union can only be sent to a Cuban so I would have had to find someone I could trust making this an even less ideal option) It’s clear that the U.S. embargo is serving its purpose in this manner. Were I able to withdraw more money, I would and I would be spending it, and thus further supporting the Cuban economy and thus its government (but also, its people!). As it is, I am seriously budgeting, and skimping where I can. 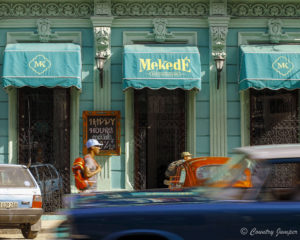 Before arriving, I’d thought that the Spanish school I was going to would have figured out some way to accept credit cards or bank transfers. An Italian bank appears to be one way to handle that, but no, again it’s all cash. So that’s $150 going out each week which puts a huge dent in my cash on hand.

Airbnb was of course paid for ahead of time. I thought I might also be able to pay the $30 taxi my host provided from the airport along with the $5 per day breakfast through Airbnb also, thus saving my cash reserves. The answer to that was a ‘no.’ It makes sense for the taxi, because money the government doesn’t know about is money that stays in a Cubans pocket. But the breakfast, that’s simply not being offered any longer.

And that brings us to food. There is food, of course. But there are two options; eating out which really is not that cheap all things considered. Or shopping at the local markets which have lots and lots of bananas. I’ve taken to eating a lot of ham and cheese sandwiches on the street, a third, very cheap, at $0.05 per stuffed roll, but not very filling or enjoyable, option. 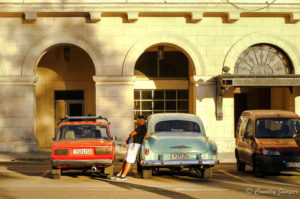 I knew it would be difficult to spend nearly a month here, and it certainly took some getting used to. There are aspects of life which are wonderful, slow, and uncomplicated. But, other pieces which are a massive struggle for the spoiled foreigner in me. I am also aware, however, that a significant portion of my struggles stem from my government, not of my choosing, which is still holding a decades old grudge against a country which really and truly could benefit from a bit of forgiveness. 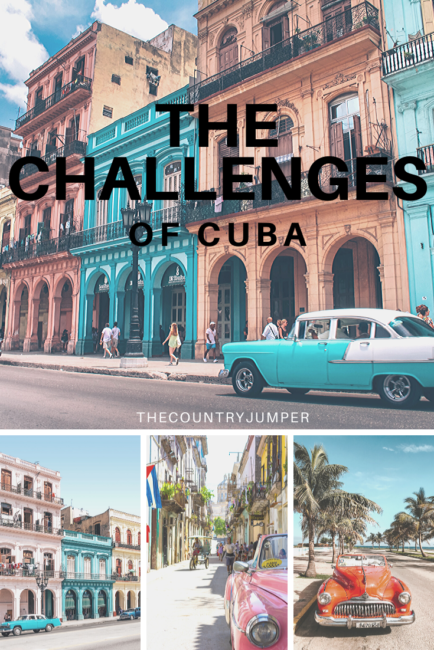 Such an interesting read. I have only been to Cuba once for my honeymoon. So, of course, we were at a resort, and did not have to worry about the things you mention. But now when we travel, we stay away from resorts and organized holidays because I don’t think you can learn about local life if you are not part of it. Your post just proves that point. Thanks for sharing!

Thanks for reading Bea! I think resorts can be a great place to relax for things like honeymoons but totally agree that its really not the way to learn much about how life really operates.

This is so interesting. I had no idea about some of the complications introduced by the US embargo – especially about money! I guess we take easy access to money so much for granted these days..

Oh I don’t think I’ve ever appreciated how much I take it for granted! Even in countries where I know I can’t use any of my credit cards I can always use an ATM!

I suspect the block on access to our US bank accounts is also a result of US policy. Pres. Obama had limited success in opening US banking. As a result we are also still disadvantaged by the .87 CUC USD exchange rate.

The solution could lie with the Congress if they move to end all travel restrictions, see tinyurl.com/Cuba4all

However, as you write, the challenges are worth it.

Yes, the the block on U.S. banks definitely comes from our side, not theirs. I do hope they lift all these restrictions soon. But, totally worth dealing with to visit this beautiful country!

The Challenges of Cuba