Your Guide to Visiting Gdańsk, Poland

The City on the Sea

All the way up on the Baltic coast of Poland (if you’re not already planning to go, read why you should be!), sometimes known as the free city, Gdańsk is the city by the sea I was ready to fall in love with but kinda didn’t. Gdańsk is small and it’s trying really hard. I think too hard. And perhaps falling a bit short. The main riverbank through old town is abutted by cookie cutter perfect buildings filled with terraced restaurants, and the river is filled with discarded rubbish. The opposite bank is home to a miniature London Eye, a Ferris wheel of little compartments providing picture perfect views of…cranes. There are tourists walking down the cobblestoned, pedestrianized streets, women, children, and men who get propositioned by local ladies luring them into strip clubs. It’s a cute city but it’s not as perfect as I, or it, want it to be.

How to get to Gdańsk

We took a train from Warsaw. The ride was scheduled to be 3.5 hours but ended up being a little over 4. Luckily, this time we had reserved seats, but there were plenty of people standing in the aisle and even with our reserved seats in an 8 person compartment we were crammed, hot, and sweaty! The ride, booked through PKP Intercity, cost 50.40 PLN ($13.23; €11.85) each. If you’re traveling in or around the summer season you should certainly book as soon as you can.

Getting to Gdańsk city center from the

What to do in Gdańsk

Go to a Football Match 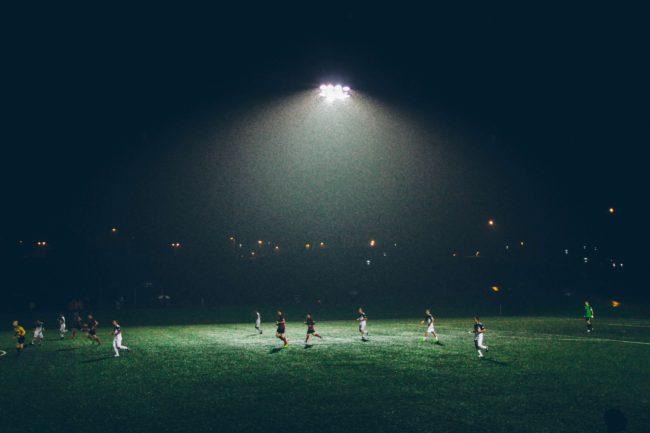 See what special events are on

We happened to be in Gdańsk during the UEFA U 21 2017 Finals. What this translates into is the European Football Association finals for national teams under 21. Basically, these are younger professionals who all play for club teams as well as their national teams. So they are at the top of the game for their age. We watched a Portugal V. Spain game in Gdynia, two towns over from Gdańsk. An easy 30-minute train ride costing us 13 PLN ($3.47; €3.06) each, return, got us there quickly. The stadium was small but full with almost 14,000 people. It was a really fun and different thing to do while traveling, something I wouldn’t have found on my own, but my brother noticed the signs in Krakow and is also a big football fan. While the chances of this being on while you’re in town are probably real slim I think the point here is more to research what events are going on because ya never know! 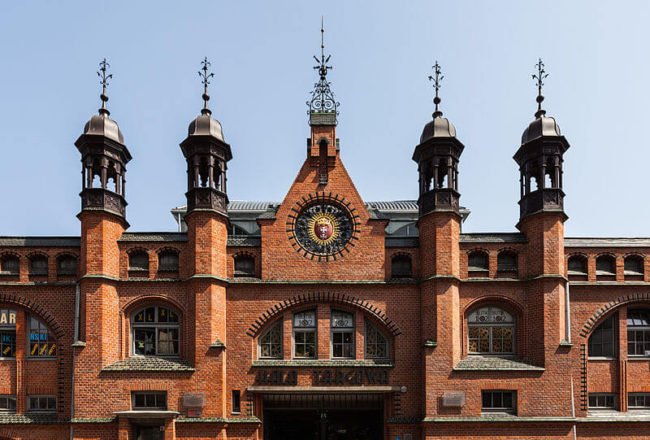 Hala Targowa is only meters from old town square but often overlooked. We wanted to get some fresh fish and really had to search through the depths of google to find this spot. Housed in an old brick hall, the main and upper floors are mostly full of cheap, probably knock off clothes. But downstairs are plentiful meat vendors, some cheese, some chocolates and tucked away in the corner, fresh fish. You’d think there would be more fish choices in a city right on the ocean, but herring is consistently the go to choice. We ended up with a bit of herring as well as some other white fish which the three people in front us also walked away with so it seemed safe, but I have no idea what it is. Outside the hall, along the side road, runs the produce market. We did a little shopping there and in the end walked away with lettuce, a tomato, an avocado, half a kilo of green beans, half a kilo of strawberries, 300 grams of different sliced meats, 150 grams of cheese, two pieces of herring, a small herring salad and a large piece of white fish for 64 PLN ($17.11; €15.07). Not a bad haul. 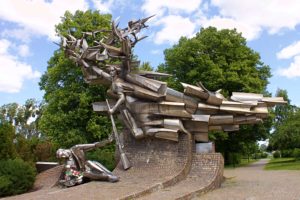 We went on our second freewalkingtour.com tour in Gdańsk and were not super happy. The tour guide was almost too knowledgeable. She gushed information, a lot of which only history buffs specializing in Poland would be interested in. We covered little ground and didn’t see anything we wouldn’t have found on our own. A great tour guide who was giving the wrong tour.

Go to the Beach 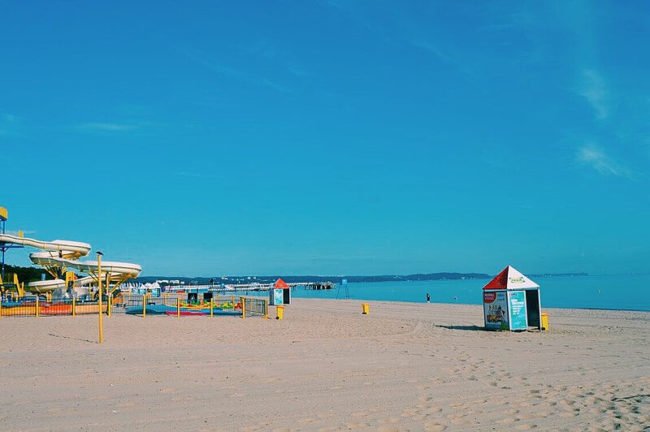 Gdańsk is about 8 kilometers inland from the closest beach. There are two easily accessible by tram- Stogi and Brzeźno. We headed to Brezeźno, the more northern of the two. We took the number 13 tram from the city center to the stop with the same name- Brzeźno. Tickets cost 3.10 PLN ($0.83; €0.73) per person each way and can be bought from automated machines at most tram stops. They need to be validated when you enter the tram. From the tram stop the beach was only about two hundred meters. We grabbed a soft serve on our way to the sand. It was a coolish day for late June- about 65° F (18° C) but sunny. The beach was spotted by a few brave sunbathers and a few even braver ocean bathers but mostly there were others like us, bundled up against the cold wind, still enjoying the beautiful spot. We had the idea to walk all the way along the beach until Sopot, almost 6 km of uninterrupted sand but got maybe 500 meters before we sat down and had a piwo while enjoying the sun and the view.

Where to eat in Gdańsk

It’s all potatoes all the time at Pyra Bar. With a menu full of potato pancakes, potato dumplings, potato casseroles and a few salads you’re probably gonna be eating potatoes. But they’re good. My brother got potato pancakes (three in a serving) with a creamy bacon sauce and I got a potato casserole (a small size- which was more than I could finish) with smoked salmon, cream, chives and a melted cheesy top. With our mains costing 14 ($3.68; €3.29) and 17 ($4.46; €4.00) PLN respectively the meal was filling, pleasing and affordable. 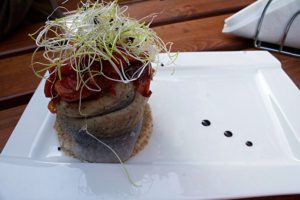 A microbrew pub started in 2012, Browar Piwna is located on Piwna (beer) street. It’s got a lovely front terrace on a quiet traffic street and friendly English speaking waitresses. My brother and I shared an Old Polish Board and Herring two ways. The polish plate was a variety of different meats and a pâté with bread and a mix of mustard and horseradish. The herring came one with a white cream sauce and the other with a red sauce. All of it was delicious and the two plates were more than enough to leave us both satiated. We both had half liter beers and the total for everything came to about 78 PLN ($20.47; €18.34).

Another milk bar, Neptun Bar is deep in tourist town the prices weren’t dirt cheap but they were still lower than elsewhere. This milk bar was a point and shoot type of deal. No menu in English, there were prepared example plates, all of which actually looked quite good. I ended up with a chicken cutlet with two sides of boiled potatoes and carrots. I also grabbed a plate of a coleslaw like salad with pickles and a cold Lipton iced tea. All of that added up to 27 PLN ($7.09; €6.35). I have to admit that I’m a big milk bar fan, the meals are simple but the food is good, it’s a relief to be able to get a good lunch out without all the fan fair. Give it a try for sure.

Dom Sushi is right on the water with a terrace and a lunch special. An affordable price gets you your choice of soup and a plate of sushi of your choosing. Vegetarian options are available. 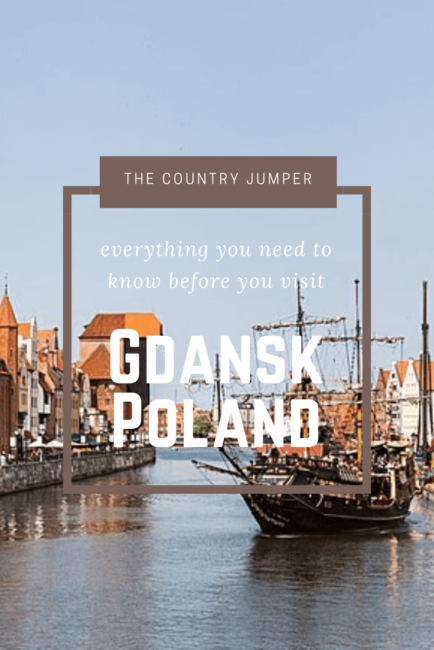